Patriot Front is a neo-fascist, white supremacist group that was created by Texas based teenager and avowed fascist Thomas Rousseau. The group initially splintered off of Vanguard America, an explicitely Neo-Nazi group that was responsible for the Death of Heather Heyer at the 2017 Unite the Right Rally in Virginia after one their members drove his car into a crowd of counterprotestors. Patriot Front espouses a white supremacist and fascist version of American Nationalism, and their propoganda utilizes a mix of American Patriotic imagery and fascist symbolism. For example, the groups logo is a fasces with 13 stars around it, which was the original symbol of the Italian Fascist party in the 1920’s and 30’s.

“An African, for example, may have lived, worked, and even been classed as a citizen in America for centuries, yet he is not American. He is, as he likely prefers to be labeled, an African in America. The same rule applies to others who are not of the founding stock of our people as well as to those who do not share the common unconscious that permeates throughout our greater civilization, and the European diaspora.” The manifesto also claims that democracy has failed in the United States, and explicitly advocates for a fascist government. It goes on to say “The time of the Republic has passed in America as the system grows too weak to perform its duty. … The damage done to this nation and its people will not be fixed if every issue requires the approval and blessing from the dysfunctional American democratic system. Democracy has failed in this once great nation.”

While the group explicitly brands themselves as American fascists, they typically utilize theatrical rhetoric and flashy propaganda to try to appeal to a more mainstream audience. The group often engages in flyering and banner drops, as well as the occasional flash mob. These events are often short lived and tightly choreographed for propaganda value. The most recent of these events took place in Washington DC on December 4, when 200 Patriot Front members marched on the National mall in Washington DC wearing knee pads and carrying shields. Due to infiltration by antifascists the group’s Uhauls arrived hours late, leaving the assortment of Patriot Front fascists shivering in the December weather. Patriot Front also was in attendance at the annual March for life in Chicago, seemingly in an attempt to recruit new members and spread their propaganda. While many members of the March for Life berated the group and accused them of hijacking their movement, they also received some positive attention from rallygoers.

After their recent stint at the March for Life in Chicago, Unicorn Riot released hundreds of chat logs and materials from the group exposing their inner workings. Unsurprisingly the organization is strictly micromanaged by Rousseau, who seems to rule over members with an iron fist. Members are required to report their weight, fitness activity, and diet, and any unwanted change in diet or weight gain could lead to suspension or expulsion from the group. The organization also does not allow members to drink alcohol or talk about gun ownership, and all of the groups propoganda must be bought directly from Rousseau, who uses the money to pay his rent. The leaked chats also show a coordinated effort to commit vandalism against murals and sculptures dedicated to social justice movements. In the Pacific Northwest these have included the defacement of the statue of York on Mount Tabor in Portland (not mentioned in the chat although there is evidence Patriot Front was involved) and the covering of an LGBT pride mural in Olympia

What we have also learned from combing the leaked chats is that the group also tries to recruit members who have experience with programming and cybersecurity onto their “tech team.” This brings us to Riley Johnson a.k.a Tyler SD. Riley is currently majoring in Computer Science at the University of South Dakota, and has done internships with the defense contractor known as Mantech. He has participated in numerous cybersecurity competitions including one hosted by AT&T.  He is also an avid racist and one of three members of patriot front in South Dakota. He has also worked extensively on Patriot Front’s website and cybersecurity. In the chat logs Riley shows his extensive knowledge of computer science, and frequently helps members with websites they own

Oddly despite his technical knowledge Riley was never on Patriot Front’s tech team but did play a huge role in vetting new Patriot front members. Due to a paranoia of infiltration by antifascists, the group has an extensive vetting process involving first filling out an application for the group then participating in an online and in person interview. Riley was the notetaker for many of the online interviews, and sometimes participated in vetting members in person. He also played a role in the decision to accept new applicants. It is worth noting that a lot of applicants political affiliations are explicitly National Socialist or white nationalist. Applicants must also be straight white males between the ages of 18-35 (Although they have recruited teenagers younger than 18) and cannot be overweight or have medical conditions.

Riley has also attended multiple events with the group, including their December 4 march on the national mall in Washington DC. It is unclear how long Riley had to wait to get into a Uhaul but it was probably a while.

In October of 2021 Riley attended a hike with Patriot Front members in Michigan. Much like their public appearances, nature hikes are choreographed events, and members typically take group photos holding an American flag with Patriot fronts logo where the 50 stars would normally be or they may film themselves reading the groups manifesto. On this particular hike the dozen or so fascists including Riley left Patriot front flyers in their wake

The evening after their hike the group filmed themselves burning LGBT pride flags over an open campfire while chanting the fascist slogan “Blood and soil.” which has its origin in Nazi Germany. 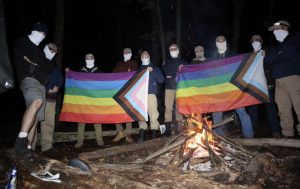 According to the groups chat logs Riley has flyered and stickered with other members of the group, which is a requirement for members. These flyerings are often used as propaganda on Patriot Fronts Telegram channel and more often than not they are used to intimidate members of minority communities.

Due to Riley’s connection to defense contractors and knowledge of cybersecurity he presents a threat to anyone he comes into contact with.

Please contact Mantech at (703) 218-6000 and tell them to stop giving internships to Nazis. Also go to https://dsu.edu/contact.html and tell them that they have a Nazi in their midst 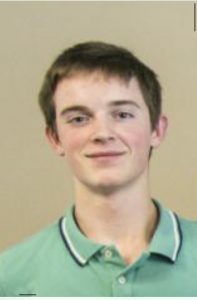 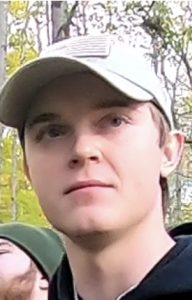